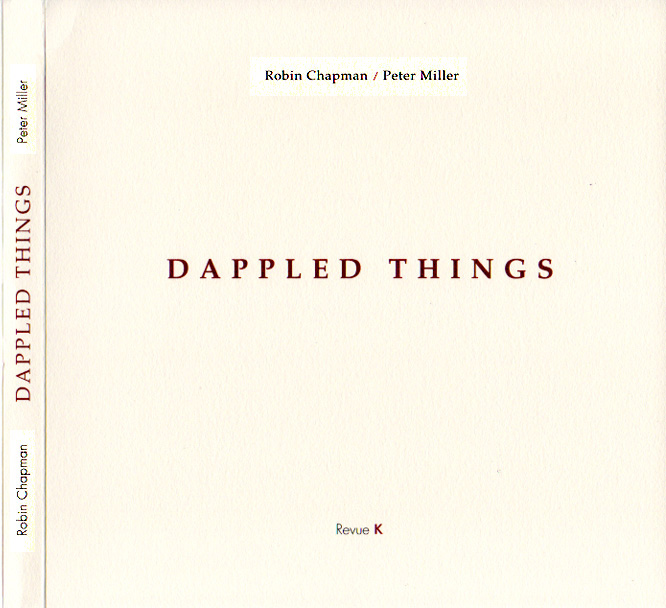 Dappled Things published in 2013, pairs 23 photogravures by Peter Miller with poems by Robin Chapman. Following Peter Miller's Clairvoyant, 'Dappled Things' explores the sensations, in word and picture, created by sunlight filtering through trees, conjuring an imaginary world from daydreams. The poem Who Knows How, turns the flower-pond of Interlude into a waltz as we turn and spin / turn and spin -- music / holding us in its arms. Sheer magic! 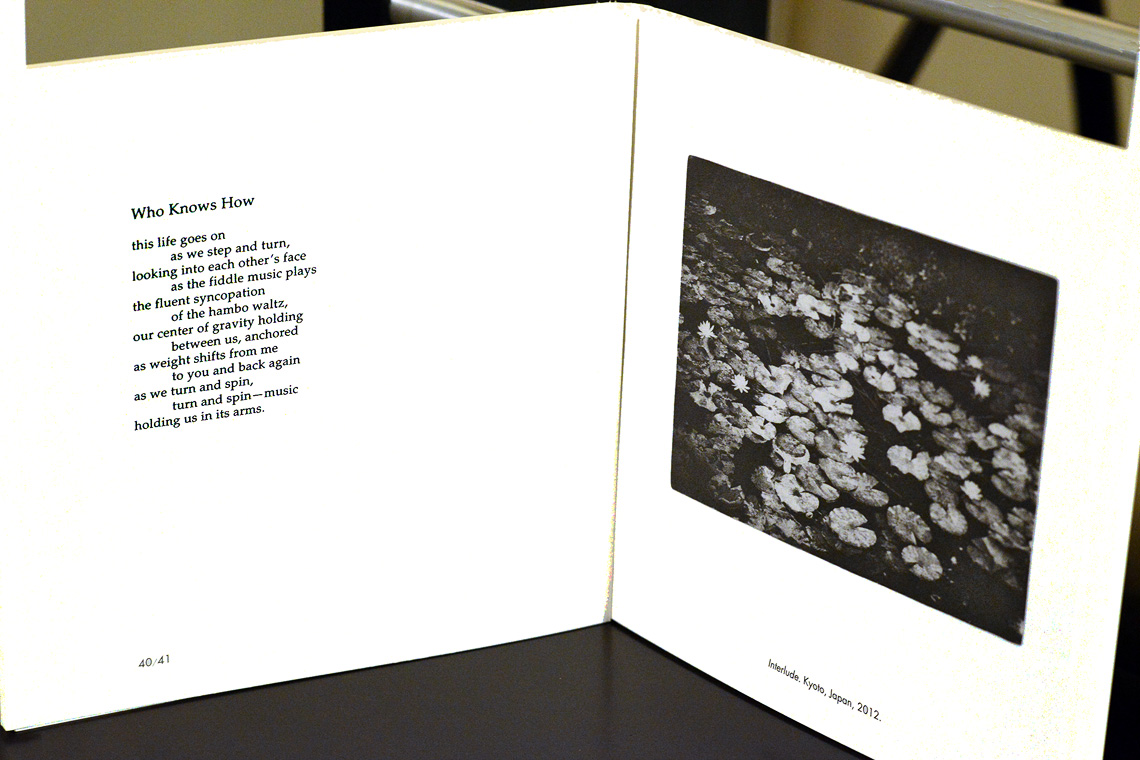 Robin Chapman is the author of twelve collections of poetry, including the Parallel Press chapbook The Only Everglades in the World and the Posner Poetry Award-winning books The Way In (Tebot Bach) and Images of a Complex World: The Art and Poetry of Chaos (World Scientific; with J.C. Sprott's fractals and explanations). Her book The Dreamer Who Counted the Dead (WordTech Editions) received a Wisconsin Library Association Outstanding Poetry Book of the Year Award, and her book Abundance received the Cider Press Editors' Book Award. The Eelgrass Meadow (Tebot Bach) is her most recent book. She has received three Wisconsin Arts Board grants, including a 2007 Literary Arts Fellowship, and collaborated with composers, painters, textile artists and scientists in producing work. She is recipient of the 2010 Appalachia Poetry Prize. Robin Chapman lives in Madison, Wisconsin, USA.


Dappled Things may be ordered online for $30, or 3,500 Yen, or 28 Euros, including postage, by clicking the Order button below. Or please send a message to the address below, indicating how many you would like and the address to send them to. Gift orders are also accepted (please indicate ship-to address and any note you would like to add). Orders will be filled as received while supplies last.

Clairvoyant, published in 2012, includes 14 elegantly printed images from photogravure etchings by Peter Miller, and an introductory essay by art philosopher Marie Parra-Aledo. For more information, and to purchase the book, please visit the Clairvoyant page.

Both books together may be purchased for a special price.

into your email (日本語 OK).


Dappled Things consists of 23 poems by Robin Chapman paired with 23 black and white photogravures by Peter Miller printed on high quality vellum in looseleaf folios within a cream folder and a blue box, as a cycle of etchings would be presented in a limited edition. The book title and the titles of the poems come from the well-known poem 'Pied Beauty' by Gerard Manley Hopkins (1844-89), the poet and Jesuit priest who wrote during the period when Peter's technique of etching on a copper plate first provided a means to preserve photographic images without fading.

Both the poet and the visual artist had been working on their separate projects before Peter invited Robin to write poems for his etchings. They had met in the 90s through a mutual friend; Robin had long admired his works and had chosen one of them as the cover for The Way In. She was prepared to see the resonance between her poems and the prints.

Her decision to enter into this project may at first seem to be a leap of faith. Robin's poems tend, like Hopkins' later poems, to be abundantly endowed with imagery, while Peter's prints tend to be spare, in accord with the aesthetic he favors as an artist who has established his studio in Japan. Even when the source of his inspiration is the natural world of Mongolia, Nepal, Portugal and the U.S. in addition to Japan, he sees through the lens of Japanese art, which, like Japanese poetry, is directly focused but also mysterious, even evasive. Both, however, share Hopkins' love of the earth's majestic offerings.

The process of pairing the poems with prints was complex. Robin made her recommendations; Peter voted on those and asked for a few more images to be included; Robin wrote poems in response to those; and then they 'fine-tuned matches and poems several times' (email from Robin). Thus most of the poems are not ekphrastic in the usual sense of being 'about' the prints or vice versa. They are instead related through Hopkins' metaphor of 'dappled things.'

The word 'dappled' usually means marked with spots, and the print Carried Away that is paired with Robin's title poem is full of petals from a Japanese cherry tree and patches of clouds and sunlight that may be seen as spots. The accompanying poem, however, focuses on the larger patterns of light and dark, sun and shadow,warp and weft rather than the particulars of a scene. The effect is to shift this viewer's attention to the the darker areas of the print where I had not looked.

Likewise, Peter's print Reach for the Sky asks us first to focus on the stark old wooden gateway to a Shinto shrine in the foreground, while the accompanying poem, 'Glory Be,' draws attention to a whole range of things that are broken, lost or outcast (bones, crutch, cane), then found and loved again. Robin echoes Hopkins' famous sprung rhythm in short prepositional phrases filled with alliteration, assonance and participles that create a sense of motion. So when we look back at the print, we are likely to see movement in the clouds and growth on the rocks.

Just as Hopkins was determined to make the most of everything in Creation, even though he knew the pain of loss, Robin sees in even the starkest images a spark of life, and the same may also be true of Peter. Take for example his print of two potatoes against an unrelieved black background. The title Potato Moons encourages us to see the print metaphorically, as if they were the same--life and death, earth and sky. Instead of elaborating on that metaphor, Robin titles her poem Counter and piles up adjectives to emphasize the difference between opposites, claiming that we are all the product of the 'pressure and strain/ in that brief niche where life's sustained.' Both artists make something more of the mundane.

Time and again, Robin's words supply elements that seem at first to be missing from the prints, and the prints provide a visual reference for a metaphysical insight. The poem 'Spare,' for instance, which focuses on an injured crow walking on snow and sees it as a metaphor for our own 'broken-winged days,' ends by being 'grateful for life's brief flight of joy, light-blest.' Across from the poem, Peter's print Beyond the Sunset gives us shades of darkness as earth's horizon shifts in relation to the sun. The darkness that encroaches on the interesting cloud-shapes may now be seen as a gigantic crow if we wish, but the revelation lies in the last light of the vanished sun.

Hopkins was troubled by depression. Born into an Anglican family of artists and intellectuals, he turned naturally to art and poetry at Oxford, only to reject love, forego art and burn his poems before entering a Jesuit order. When he returned to poetry later, perhaps to express insights and experiences that had no outlet in his Jesuit assignments, he shared it with very few friends and did not seek to publish it. His most famous poems, however, express awe for the Judeo-Christian God. Pied Beauty begins 'Glory be to God for dappled things,' and the last line is 'Praise him.' Thus it seems inportant to consider the relationship of these poems and prints to his religious perspective.

Peter's print titled Waking the Gods is one of the few in this book that includes a human image. The scene is a Buddhist temple where prayer sticks are burning in a sand-filled urn to call the Bodhisatvas, and clouds of smoke rise to surround a small boy on stone steps above the urn, who is reaching for or holding onto either a person in ceremonial dress or a ceremonial artifact while he speaks or reacts to something outside of the frame to our left. The companion poem He Fathers Forth, from the penultimate line of Pied Beauty, begins with sky imagery but quickly adds she mothers forth, earth's engendering/crust of rock, clay, sand, loam and all,' and goes on to portray this earth as both a net and a nursery that allows a 'continuous exchange of breath,/ wet heave and birth.' Maybe it is fair to say that just as Hopkins found inspiration in light and darkness, air and earth, so do Peter and Robin, and it matters little whether they are Buddhist, Christian or earth-centered.

Robin calls the book a five-way collaboration -- or conversation -- among Hopkins, Peter, Roman Kames (the artist-publisher of Revue K Press), the reader and herself. I call it a beautiful book with great potential to awaken creative energy in its readers. Praise them.

Estella Lauter is Professor Emerita at University of Wisconsin-Oshkosh and lives in the Door Peninsula.